Women Should Learn (and So Should Men) 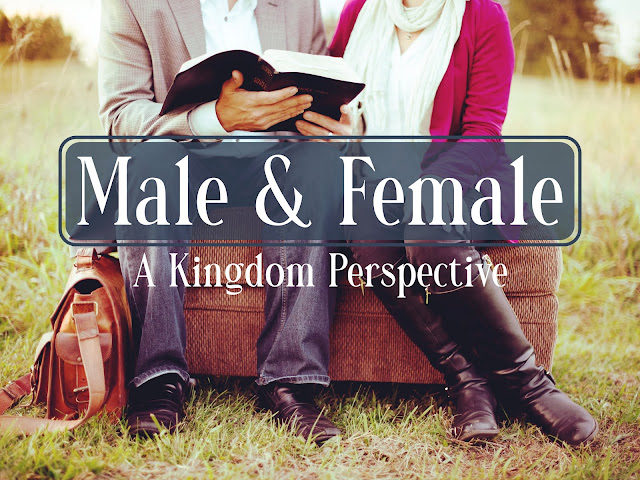 Our church is getting ready to make the "radical" move to incorporate female leaders in our ministries and worship assembly. I know, I know... you may be thinking It's 2020, and it's about time!

But for a lot of people this is one of the defining characteristics of what makes a church a "Church of Christ." We're the church that doesn't use instruments and doesn't allow women to lead. But that is slowly changing, and I do mean slowly.

Sure, some of the larger churches of Christ around the US have already started using instrumentation in their worship services and allowing the voices of women to be featured. But those are not the majority. It's still very rare for a church of our size and location (smaller, rural church) to make that kind of move.

So why did we do it? Why rock the boat?

We believe that it is the right thing to do in order to more fully become the Kingdom of God as those living in the New Creation. It's not a gimmick to attract more members. We're not simply catering to the demands of a few vocal families. We are trying to be true to the mandate of Scripture and the prayer of Christ - "Your Kingdom come. Your will be done on earth as it is in heaven."

And yes, that means being faithful to those two passages in 1 Corinthians 14 and 1 Timothy 2.

Paul's letters were nearly always written to address specific problems in specific churches. The church in Corinth was having a TON of issues, but one of them was a disorderly and disruptive worship. They had people vying for attention and power. They were in competition with each other to outdo and outshine the others' gifts. Some followed Paul, others Apollos, and others Peter. The rich weren't waiting for the poor to get off work before sharing communion. People were speaking all sorts of languages without any interpretations. Preachers were speaking over each other. Women were interrupting the whole service with their questions. It was a MESS.

So in one small part of his entire letter addressing all these issues and many more, Paul addresses the matter of women derailing the whole service by questioning the speakers.

Women [or wives] should remain silent in the churches. They are not allowed to speak, but must be in submission, as the law says. If they want to inquire about something, they should ask their own husbands at home; for it is disgraceful for a woman [or wife] to speak in the church.
(1 Corinthians 14:34-35)

1) What's the problem? Paul seems to be specifically addressing the outspoken but uneducated women in the church. This indicates that they were probably Greek women with no background in the Jewish religion or worship practices. Men and women were separated in most Synagogues during their Sabbath worship gatherings, but they were all reverent and respectful. Reverent and respectful were NOT words to describe the Greek women of Corinth. They were stereotypically boisterous and assertive. So it's most likely that Paul is addressing a very specific group of women who didn't understand much of what was happening or what the speakers meant. They would interrupt with a bunch of questions - which can derail an entire worship gathering.

2) What's the short-term solution? Simply put, these women need to be respectful and quiet. By interrupting all the time and interjecting their own questions and uneducated opinions, they are actually bringing disgrace on the whole group. These women needed to keep quiet...for now.

3) What's the long-term solution? By all means, ask your questions! He doesn't want these women to remain ignorant and uninformed. They need the freedom to ask their questions, and the men (or their husbands) need to give them answers. Paul is encouraging these religious discussions to follow them home. Think about that - husbands and wives having discussions about faith together in their own homes. That was radical in Paul's day. Often the husband and wife would follow different gods and each keep to their own. Even today, how often do Christian couples talk seriously and deeply about their faith at home, or even *gasp* in front of the kids? But this is right in keeping with the great Shema  of Deuteronomy 6:
Hear, O Israel: The Lord our God, the Lord is one. Love the Lord your God with all your heart and with all your soul and with all your strength. These commandments that I give you today are to be on your hearts. Impress them on your children. Talk about them when you sit at home and when you walk along the road, when you lie down and when you get up. Tie them as symbols on your hands and bind them on your foreheads. Write them on the doorframes of your houses and on your gates.

The point? Women should be able to ask their questions and get some answers. Then they will be able to actively participate in a way that encourages and builds up the whole church (1 Corinthians 11:2-16; 14:24-26).

A woman should learn in quietness and full submission. I do not permit a woman to teach or to assume authority over a man; she must be quiet. For Adam was formed first, then Eve. And Adam was not the one deceived; it was the woman who was deceived and became a sinner. But women will be saved through childbearing—if they continue in faith, love and holiness with propriety.

1) What's the problem? This one is a little tricky because there are a couple of options. Obviously there were women who were promoting some kind of false teaching about Creation, Adam and Eve, Sin, Child-birth, etc. They were trying to wrestle authority away from the men either overtly or subversively. They were probably former worshipers of Artemis, the Greek goddess of the hunt and midwifery. It could even be that Paul is addressing a very specific group of young widows who were getting all up in everyone's business.

As for younger widows, do not put them on such a list. For when their sensual desires overcome their dedication to Christ, they want to marry. Thus they bring judgment on themselves, because they have broken their first pledge. Besides, they get into the habit of being idle and going about from house to house. And not only do they become idlers, but also busybodies who talk nonsense, saying things they ought not to. So I counsel younger widows to marry, to have children, to manage their homes and to give the enemy no opportunity for slander. Some have in fact already turned away to follow Satan.
(1 Timothy 5:11-15)

2) What's the short-term solution? Same as the 1 Corinthians passage, Paul instructs these women to keep quiet, stop trying to control everything, and stop promoting incorrect teachings.

In both instances, Paul is addressing a specific group of women causing a specific problem. He offers a short-term, immediate solution (stay quiet), but also a long-term solution (teach them, let them ask their questions, give them answers).

There's a fourth question that must be asked, though: 4) To what end?

I must admit that in my experience in the churches of Christ, we have this part of Paul's instructions nailed down. Women are given every opportunity to learn alongside the men. Some of the most knowledgeable Christians I know are godly, faithful women. They have taught and inspired me from the time I was young. We do a good job of teaching our women.

But to what end?

Why were the Corinthian women encouraged to ask their husbands questions about faith and receive answers to their questions as they had religious discussions in the home? It would make sense to me, in keeping with the context, that these women would then be able to pray and prophesy (1 Corinthians 11) and to offer a song, a word of encouragement, or a message from God's word (1 Corinthians 14) in an orderly and understandable way that encourages and builds up the body of Christ.

Why were the women of Ephesus encouraged to learn? In keeping with the context, it would seem that they should learn in order to become better leaders and more sound in their teaching. By learning in quietness and submission, they can go on to lead lives that are examples of faith to everyone around them.

I want to wrap this up with one final point.

The things that Paul says about women can equally be applied to men. Men should also learn in quietness and submission. Men shouldn't assume authority over anyone for its own sake. If there is a man teaching something incorrect, then it should be corrected. Men should live lives of love, holiness, faithfulness, and propriety. Men shouldn't be disruptive with their questions, but should be able to ask their questions in an appropriate context and get answers.

It is my prayer that we can all learn in quietness and submission, that we wouldn't assume authority over each other but would submit to one another out of reverence for Christ, that we can all find answers to the questions we may have, and that our homes would be filled with conversations about God.
Church Leadership. Learning Men Teaching Women Women's Roles