Showing posts with the label Valley of the Workers
Show all

Valley of the Workers 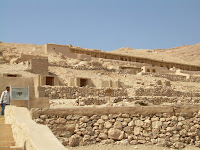 On the other side of the mountains from the Valley of the Kings lies the Valley of the Workers which is the best preserved working-class village in all of Egypt. Down in the valley are the ruins of about 73 houses and some other structures, even one of the earliest paved roads in the world. This village dates back to ca. 1450BC or earlier and gives us the earliest clues as to what life was like for the working class citizens of Egypt. Up on the hill beside the village is a series of tombs which the workers prepared for themselves. We were able to enter 2 of the better preserved tombs which both had frescoes painted on the walls which are much more well-preserved than any paintings in ancient Egypt. With as much fame as the Pharaohs receive because of their massive building projects, the workers who actually built those structures also built some impressive, smaller structures, like smaller pyramids on top of some tombs, paved roads, and vaulted ceilings dating back to at least 1450B
Post a Comment
KEEP READING >>
More posts