Showing posts with the label Tel-Dan
Show all 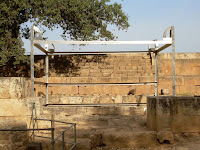 Day 3: Tue 11/18/08 Tel-Dan: When thinking about historically/biblically important cities and/or archaeological sites, the ancient city of Dan might not make the top of your list. However, as I found out today, it is actually very important for several reasons. First, from the archaeological evidence in the layers of the city, we can tell that there were three distinct times when the city was completely destroyed and then rebuilt. The first dates back to the time of the Exodus/ Conquest of Canaan (ca. 13 th Cent. BC). The second dates back to the 11 th Cent. BC, which lines up perfectly with the biblical account of the tribe of Dan’s moving from southern Israel to the northernmost territory and destroying the city of Lashish. The third destruction layer dates to the approximate time of the Assyrian invasion of Israel . Secondly, it confirms the account in the Old Testament of King Jeroboam’s construction of two cult centers for
Post a Comment
KEEP READING >>
More posts