Showing posts with the label Shower Heads
Show all

Easy Green Tip of the Week 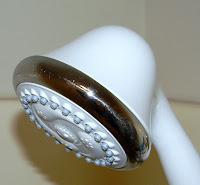 I love a nice, steamy shower almost any time of the day. However, apartment living has basically forces us to endure small, inefficient water heaters. So a couple weeks ago, we decided to upgrade to this:


It's the EcoFlow by WaterPik. It has several different settings, including a "Water Saving Trickle," which actually has more pressure behind it than our old shower head. On the "trickle" setting, it sprays 2.0 gallons per minute (gpm). That's down from 2.5 gpm with our last one.

It may not seem like that great of a difference, but over a 10 minute shower, you end up saving 5 gallons of water. Since both my wife and I take showers almost every day, that turns into a 10 gallon savings each day. This quickly adds up to 3,650 gallons of water per year! This $20 shower head should pay for itself in no time.

But if you want to save even more on your water and electric bill, there are shower heads that shoot as little as .5 gpm! I haven'…
Post a Comment
KEEP READING >>
More posts