Showing posts with the label Mount Olympus
Show all

Thessaloniki - in the shadow of Olympus 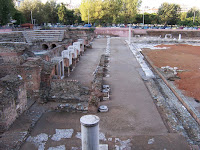 The remains of the Roman forum in downtown Thessaloniki Monument in honor of Alexander the Great, the founder of the city. Looking down on the city from the Acropolis. You can see Mount Olympus in the background. Thessaloniki: You may not realize it, but Thessaloniki is the second largest city in Greece and had pretty much always been about as important as Athens. At many times throughout its history, Thessaloniki has acted as a sort of second capital. It was established by Alexander the Great in honor of his sister. There aren't as many historical excavations taking place in Thessaloniki simply because it is difficult to excavate a city which has 2million people living on top of it. They are working hard to dig up the places they can, like the Roman forum in the top picture. It was amazing to see how close Mount Olympus is to the city. I never realized where exactly the mountain of the gods was. It is a beautiful range of mountains directly across the bay from the city, and
Post a Comment
KEEP READING >>
More posts