Showing posts with the label Memphis
Show all 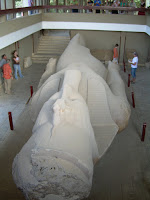 The cities of Memphis and Saqqara were the last stops on our trip to Egypt. We didn't really spend much time at either site, so I'm combing the two into one entry. Memphis : There wasn't much to see in Memphis other than a small sphinx statue and a gigantic (fallen) statue of Ramses II. I think the only reason we actually went to Memphis was the fact that it was the capital city of Egypt when Abraham and Sarah made their trip down south. This is where Abraham lied about his relationship with Sarah to the Pharaoh. Interesting story, not a very interesting place these days, though. Ironically, there are no huge pyramids in Memphis, Egypt, unlike Memphis, Tennessee, which has that obnoxious Pyramid right on the Mississippi River. Saqqara: The main feature in Saqqara was the Step Pyramid of Pharaoh Zoser, which was the first burial pyramid ever built. To quote my friend Jon, "It's not a full blooded pyramid. It's just a step-pyramid..."
Post a Comment
KEEP READING >>
More posts