Showing posts with the label LED Bulbs
Show all

Easy Green Tip of the Week 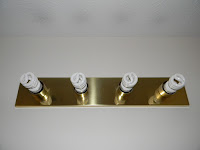 
Over the past couple years, we have been switching out every single incandescent light bulb for the newer, more efficient CFL bulbs. While they do cost a bit more on the front end, the savings in your wallet and in the environment are huge over the long run.


Think about it. A 13 watt CFL produces the same (if not more) light as a 60 watt incandescent. By using 4 CFLs, we are still using less energy than 1 incandescent (13x4=52 watts).


In our apartment right now, we have 16 CFLs between 10 and 13 watts each. That means we are using roughly 200 watts to light up most of our apartment. With traditional bulbs, we would be using 960 watts!


According to cflbulbs.com:
Replacing a 75-watt incandescent bulb with a 20-watt CFL will reduce your consumption of electricity by roughly 550 kilowatt-hours -- over the life of that bulb. In relation to a coal-fired power plant, this amounts to nearly 500 pounds of coal (about the size of a couple garbage cans) that didn'…
Post a Comment
KEEP READING >>
More posts