Showing posts with the label Islam
Show all

The Alabaster Mosque of Muhammad Ali 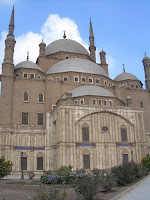 This is one of the more impressive "modern" structures I saw in Egypt, dating back to 1815. This mosque was built in honor of Muhammad Ali and is constructed entirely out of alabaster, hence the name... The design is based off the Hagia Sofia in Istanbul, except way smaller. It's actually built inside an ancient citadel built by Salahadin in 1187 on the only road leading from Canaan to Egypt. The mosque is no longer used as a place of worship or prayer, its main function is a monument, actually, to Muhammad Ali (not the boxer), a man who liberated Egypt from the oppressive Ottoman Empire and was crowned King of Egypt in 1840. His tomb is inside the mosque and thousands of Musilms make a pilgrimage to this mosque in Cairo to pay homage to one of the greatest Islamic leaders ever. There is also a monument to Muhammad Ali in Kavala, Greece, in honor of the help he and his army provided to Greece against the Ottoman Empire.
Post a Comment
KEEP READING >>
More posts