Showing posts with the label Giza
Show all 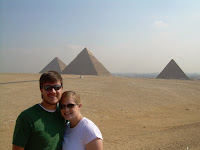 Giza: What's the first thing that comes to mind when you think about Egypt? Pyramids, anyone? Yeah, I've been there, done that. And it was amazing. You can't really tell from the pictures, but these massive structures are just on the edge of the city Giza, home to roughly 4 million people. The largest of the pyramids, the one behind the Sphinx in the picture, contains enough blocks to build a 10x1 ft. wall around the entire country of France. These pyramids are too gigantic for words to sufficiently describe. I could just imagine in the days before cars and pollution these man-made mountains would be able to be seen for miles around. Their enormity can't be entirely grasped until you are standing at the bottom look up, left, and right. Some interesting I found out about the pyramids: -They were built by hired workers, not slaves; yet it is still believed by some that they were, in fact, built by aliens. -They were constructed before the Egyptians even invented th
Post a Comment
KEEP READING >>
More posts