Showing posts with the label Divorce
Show all

Let No One Separate

On Wednesday one of our students, Lauren Woods, read a monologue that I had written for our class on Mark 10. It's one thing to read and discuss what Jesus says about marriage and divorce. It's another thing to imagine what kind of real world impact his words had - and continue to have today.

The monologue is based on Mark 10:1-12. The full script is below if you want to follow along or read it on your own.

I remember it like it was yesterday. Every new bride is nervous in the beginning. Will he like me? Will he think I’m beautiful? Will I be able to satisfy his needs? How many children will I give him? What will our life be like? Could he ever possibly love me?
All these questions and doubts were swirling through my mind throughout the entire wedding ceremony. He seemed a nice enough man. My father had made all the arrangements with his family. He was ten years older than me. I was barely a woman – only thirteen.…
Post a Comment
KEEP READING >> 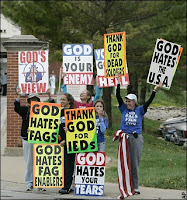 I'm sure most of you have heard of the Westoboro Baptist Church, unless you've been living under a rock for the last decade or so. In which case, stop it! There are much more comfortable places to live.

This small group of mostly relatives "worships" in Topeka, Kansas, and protests, well, just about everywhere else. There is a documentary I watched recently, Fall From Grace, which follows and interviews members of this church. The travel around the country protesting and picketing at different events (including military funerals) and places (including synagogues and other churches). One of their most common three-word-signs is "God Hates Fags." And I hate using that word. It pains me to type it.

That's a strong accusation. They blame homosexuality for most of the catastrophes and hardships that befall the US, such as Katrina and 9/11.