Showing posts with the label Capernaum
Show all 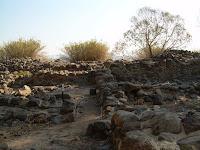 Day 2: Mon 11/17/08 Bethsaida : This was the home town of Peter , Andrew, James, and John. It was a small fishing town off the coast of the Sea of Galilee with a population less than 800. I say “was” because Bethsaida is one of the three cities in which Jesus preached that is no longer a city. Bethsaida , Capernaum , and Korazin are the three towns that Jesus actually prophecies against because of their unbelief, and none of those three towns are functioning cities today. One of the coolest parts about the site is the location. From the hill upon which the town was located you can see the Mount of the Beatitudes, the Mt. of Tiberius , Capernaum , and most of the rest of the Sea. I would like to have seen it in the days of Jesus. Sea of Galilee : After seeing Bethsaida , we went down to the Sea of Galilee and were able to take a boat out onto the water. The feeling of being out on the very Sea that played such an importan
Post a Comment
KEEP READING >>
More posts