Showing posts with the label Adam and Eve
Show all

Why did God do that? 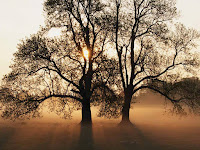 In our Sunday morning youth class we've been walking very slowly through the opening chapters of Genesis. It's been 6 Sundays and we're just now into chapter 3. There's just so much there!

I had one of those last week.

I have often heard the question: Why did God put the "tree of the knowledge of good and evil" there in the first place?

The assumption is that the tree itself was bad. The first humans were not allowed to eat of it. Ever. Never ever were they supposed to touch or eat of this tree because it was bad. God must have put it there because there could be no free will where there was temptation, i.e. God created temptation...?

But throughout the first chapter of Genesis, EVERYTHING God created was declared "good." In fact, the only thing that was labeled as "not good" was the fact…
1 comment
KEEP READING >>
More posts