Showing posts from December, 2011
Show all 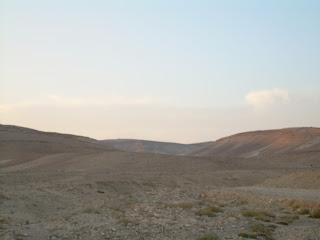 Welcome to the beautiful Judean Wilderness! It stretches for many miles out from the Dead Sea. There is little to no vegetation - a few small plants are all you see in this picture. And this desert is not covered in sand - it's covered in rocks. Not boulders, but not exactly pebbles. The ground is littered with rocks about the size of a loaf of bread. Just big enough to twist your ankle if you are not careful. This desolate wasteland is where David fled on multiple occasions. On one such getaway, David and his army are on the run from David's own son, Absalom, whose name ironically means "Father of Peace." Absalom had politicked his way to the top, going behind his father's back to gain a following in Israel. After four years, Absalom amassed an army, marched into Jerusalem, and usurped his father's throne. David and his armies escaped just in time, and fled to the Judean wilderness, along the Jordan River just north of the Dead Sea. And it's here in
Post a Comment
KEEP READING >>
More posts